Third strike and you’re out…

Posted on April 5, 2016 by nicolaliteraryramblings

We’ve got an ongoing thing in our household, where I ask a question and Daisy says “Told you that yesterday, third strike and you’re out”.  I spend so much time concentrating on the daily grind that I can’t be sure if it’s a genuine lack of concentration or the start of something more ominous, but one thing’s for certain – the months creep by, the crow lines round the eyes get deeper and you’d be pushed to call them laughter lines any more…and meanwhile the list of the number of books unread seems to be getting ever longer not shorter.

Since picking up that blogging gauntlet just 12 months ago and dauntingly plunging into WordPress, a whole new world has opened up before my very eyes and it has been a true joy to share in this innocent yet oh so deeply fulfilling passion that is to be found in the written word with so many fellow minded bibliophiles.  Daisy is keen to go off and study History in 18 months, and that has attuned us all the more here on the home front to words and wordsmiths every which way past, present and future. Watching a seventeen year old develop an equally almost obsessive love of literature will forever be an unbridled thrill.

It’s a funny old thing with this baring of souls to a known and an invisible public, though. At 53 I’m not sure I’ll ever get my head around the momentary whirl and instant fix of Instagram or all this social media, sigh. It’s obviously not an age thing, and maybe it is in someway related to the poor old brain feeling addled by not being able to hold onto something or retrieve it at a later stage as an aid to memory (a brief flirtation with Snapchat left me bristling with palpitations – my version of hell on earth, truly). So blogging does feel like a good compromise – it’s sort of a lasting way to set something temporary on the plate, if that makes any sense?

The downside to it is of course the time factor. Went to Shakespeare and Company to meet (well, not personally) Sebastian Faulks last week and hear his take on his latest novel. Love physically meeting the People who are in Print and can never resist an opportunity for an autograph – another blast from the past, and will ever regret not going up to join the endless queue when Zadie Smith was at the same famous bookstore last summer.

Faulks’s “Where My Heart Used to Beat” was not a standout for me in the way that “Birdsong” definitely was (although whether the abiding memory is of his text or the vision of a dashing Eddie Redmayne remains to be decided), but it does deal a lot with the importance of memory, and that reminded me a great deal of the excellent but harrowing “The Narrow Road to the Deep North”, so recently read, where Flanagan pontificates a lot over everything that just gets lost when a person’s memory of something is lost or the individual no longer exists. Tricky stuff.

Sebastian F. explained that the title of this new book was inspired by Tennyson’s “In Memoriam” and a thing of beauty it is too :

… Where my heart was used to beat
So quickly, not as one that weeps
I come once more; the city sleeps;
I smell the meadow in the street;

I hear a chirp of birds; I see
Betwixt the black fronts long-withdrawn
A light-blue lane of early dawn,
And think of early days and thee,

And bless thee, for thy lips are bland,
And bright the friendship of thine eye;
And in my thoughts with scarce a sigh
I take the pressure of thine hand.

Wendy has been diagnosed with early onset Alzheimers and is raising awareness all around the UK and cataloguing her journey on her “Which Me am I Today” blog. My eyes misted over this morning reading Alison Bolas’s guest post, the piece is so beautifully written. She concludes that “one day at a time is just fine with me” and I’m joining her on that one in every way. Most of my days are spent haring around dreaming up ways to ensure people on holiday here in Paris have a perfect stay, and despite the sometimes frantic, Last Minute Dot Com nature of the job, it gives great satisfaction when you can really make people’s day. It’s hardly the most altruistic job in the world, but a little kindness goes a very long way in this mad world, I hope.

So many funny tales that will sadly get lost in the swirls of the memory, from managing to hunt down a ridiculously expensive but very significant bottle of Veuve Clicquot La Grande Dame 2006 for a granny in remission bringing her grand-daughter for a once-in-a-lifetime trip to her favourite city, to leaving surprise bouquets of flowers and little misty-eyed-guaranteed messages for partners to discover on Valentine’s Day, to getting stuck in a cranky lift between the fourth and the fifth floor at midnight one evening never to be forgotten, delivering something for an early arrival next day… But whether that particular book will ever get written only time will tell.

In the meantime am practically suffering from Tsundoko * Syndrome, read about in one of Lucy’s always hilarious posts with Sarah at Hard Book Habit, and have realised it’s time to redress a few balances and get on with some actual reading rather than the constant niggling compilation of list upon list. Found myself spending a couple of very pleasurable hours a couple of weeks ago collating a line-up of books based in Paris. Had to stop and pause for breath when it went the other side of a hundred titles. 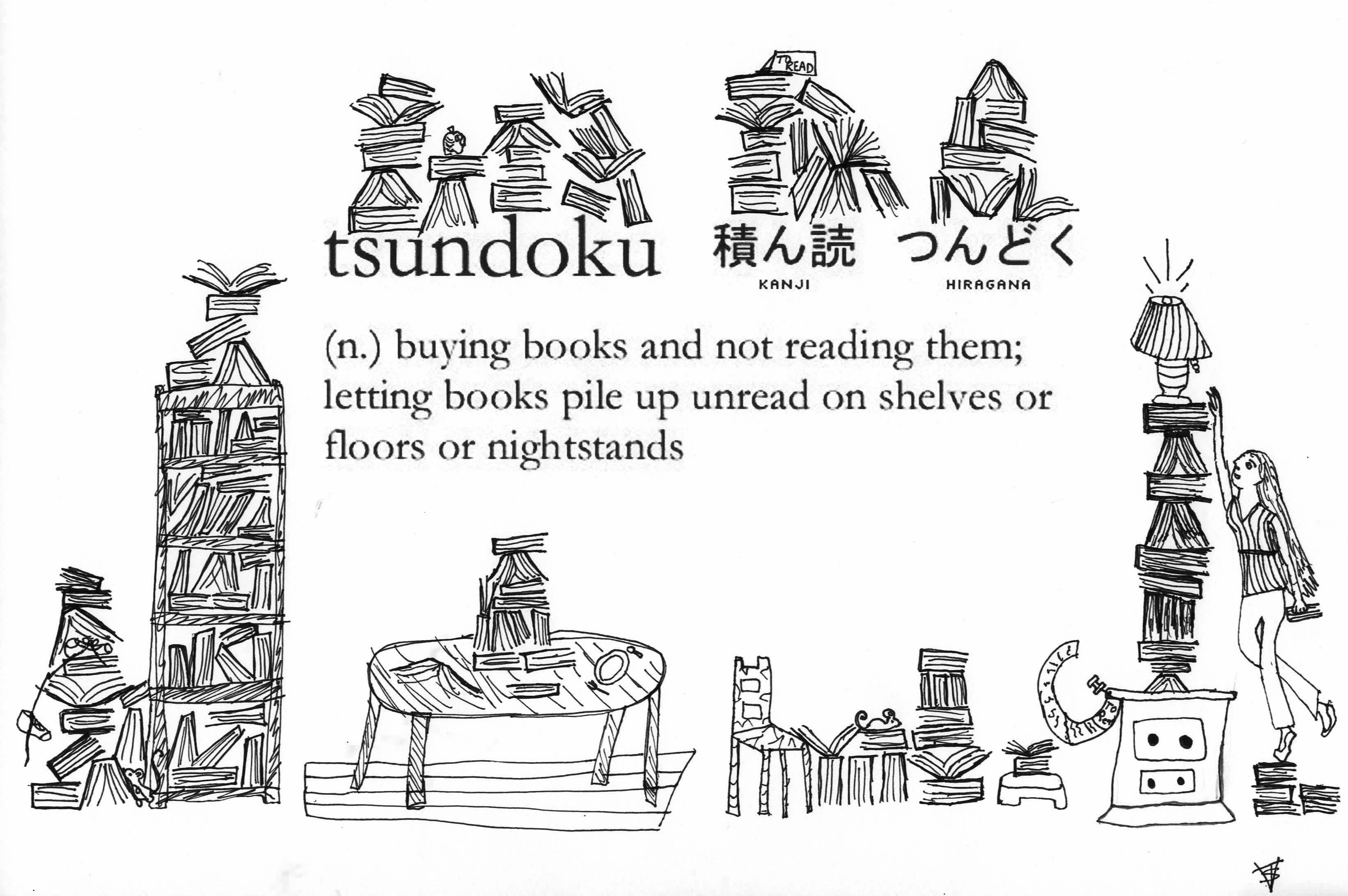 So that led me full circle to something I read a very long time ago. Susan Hill decided back in 2009 that she would take a sabbatical year and revisit her own bookshelves, resulting in her work “Howards End is on the Landing: A Year of Reading From Home”. She starts by confessing “I buy too many books, excusing impulse purchases on the vague grounds that buying a new paperback is better for me than buying a bar of chocolate”. So far so good, and it’s the quiche that always tempts me more than the M&Ms, but not to digress. Still on the choccy front, Ms Hill goes on to say, “Some people give up drink for January or chocolate for Lent, others decide to live for just a pound a day, or without buying any new clothes… I decided to spend a year reading only books already on my shelves… I wanted to stand back and let the dust settle on everything new, while I set off on a journey through my books”. Many of us did this with James’s three-month-long “Triple Dog Dare” challenge at the beginning of this year, and I can’t thank him enough for stemming my flow on the book-buying front.

Time being so much of the essence at the moment, I have decided that I am going to stem the flow on blogging about ‘what I thought of this book’ front too, and take a sort of variation on the Susan Hill Sabbatical. Will continue to follow everyone’s blogs with rapture, and will update my many lists compiled on Literary Ramblings over this past year with the compulsive habit of needing to give my reads marks out of 10 as always, but will concentrate on the sheer reading of old and new, and take these next twelve months to see how well I can do on simply making my way through those Classics and those Baileys’ shortlisted novels between now and the Spring of next year.

It seems only right to go out with one more list though – not sure if our choices will coincide, but Susan Hill concludes her book with her Final Forty, a very British list of its times if ever I saw one. Will aim to produce one of my own this time next year – in the meantime, it’s been and it’s going to be a lot of fun…

For now, over and out, and happy reading to one and all.

* Images taken from here, here and here, thanks to Hard Book Habit for the Tsundoko image shamelessly copy and pasted…

This entry was posted in Book Lists and tagged Howards End is on the Landing, Richard Flanagan, Sebastian Faulks, Susan Hill, The Narrow Road to the Deep North, Where My Heart Used to Beat. Bookmark the permalink.

25 Responses to Third strike and you’re out…