Posted on October 10, 2015 by nicolaliteraryramblings

There can only be one thing imaginably worse than losing your own child – losing someone else’s when they’re supposed to be under your care.

A bit like Clare Mackintosh’s “I Let You Go”, the story exploring “Just What Kind of a Mother Are You?” gets straight to the point and plunges straight into the open jaws of hell : ever had that skin-peeling sensation you get when the unthinkable jolly well goes and happens? Well, even if you haven’t, you get a taste of it here.

I couldn’t and didn’t put this book down. Ever the sucker for a good but not too gory thriller, this had all the ingredients to keep those pages turning and keep you guessing all the way through.

Paula Daly paints an uncomfortably true picture of the permanently harassed existence of an over-stretched mother, who knows she is living on a knife’s edge and is never quite in control – and I defy you not to squirm with horror at her realisation that the lights were on but that not everyone was home come the morning light. Talk about a rude awakening. I liked what Geoffrey Wansell said about this début novel and Paula Daly : “She writes with a singular voice and a fierce passion that roars off the page, while also displaying a visceral understanding of the betrayals and humiliations of domestic life”. This one twists and turns and it’s all entirely credible and it jolly well works. 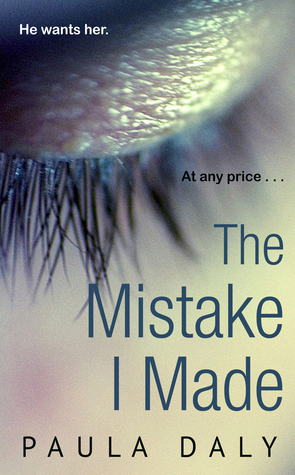 So imagine the delight of realising earlier in the year that a second novel was already forthcoming. Nothing better than finding a writer whose work you discover, and wanting to read more of the same. I raced off to get “Keep Your Friends Close”, and by the time I’d finished it a slight furrow had appeared on the brow. And now I’ve just hared off again as Mrs Daly has gone to town and penned a third thriller in under three years.

But I’ve just finished “The Mistake I Made”, and I’m feeling all deflated. This new book is a progression of the disheartened feeling after reading Book Two, and am really hoping that the best has not yet been and that it won’t be all downhill from here on in.

The problem with the second book is that it is distinctly unmemorable, and six months after putting it down am hard pressed to recall the plot with any enthusiasm. The difficulty with this third offering is that it sets off in one (unlikely) direction, but actually ends up being somewhere else entirely, and the plot is nowhere near as plausible as Book One. Single mother Roz is just about believable, but only just, and the other characters feel very two-dimensional, while the whole Indecent Proposal idea just didn’t ring true for me at all, old cynic that I am becoming.

It’s a right royal shame. I really really hope that Paula Daly will take a very small breather and come up with another fantastic story like her first novel. “Just What Kind of Mother Are You?” has a rather daft title, but it is so engaging and witty and feisty, without a hint of contrivance or a smidgeon of the overdone. Terrible pun to end with, but I think a bit of a ‘mistake was made’ with this latest one – I await the next book with baited breath and no small measure of crossed fingers for a much sought after return to form.

This entry was posted in Book Reviews and tagged Clare Mackintosh, I Let You Go, Just What Kind of Mother are You?, Keep Your Friends Close, Paula Daly, The Mistake I Made. Bookmark the permalink.