Posted on March 28, 2015 by nicolaliteraryramblings

Freshly returned from a whirlwind overnight trip to Amsterdam, and couldn’t prevent myself from dusting down a book I read several hundred years ago to see whether it had not only stood the test of time, but had perhaps even improved with age. “Tulip Fever” is set in 1632 when Holland is at the height of its prowess in terms of the merchants returning from far-flung lands; the capital is thriving and tulip mania is in full fettle.

The reason why I was suddenly frantic to revisit the book was because we had spent 3 glorious hours in the Rijksmuseum just a few days ago, strolling the Gallery of Honour and gawping at masterpieces by Vermeer, de Hooch, Heda and co – and lo and behold! the world of Rembrandt is indeed the focal part of this good read. 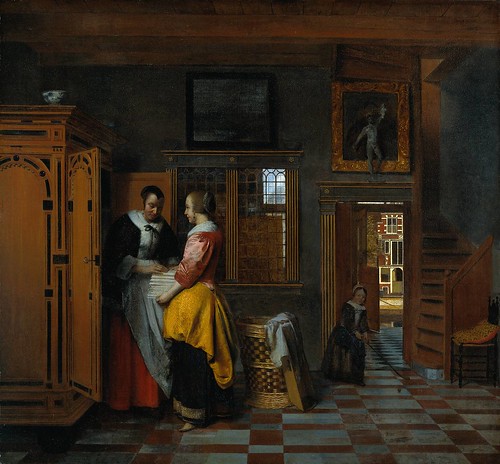 Whether you are planning a visit to the hot spots of Amsterdam (ha!) or have already clip-clopped your clogs along the canals, or even if you haven’t, then I urge you to add “Tulip Fever” to your “Have Read” list. One of the things that knocked me sideways during our short stay (apart from the obvious, clearly lead such a sheltered life) was the light glancing off the water as we walked, reflected in the 16th Century paintings we had just gaped at, with the play of shade highlighting so clearly the constraints of having so many houses lined up along the canals and blocking out so much natural sunlight.

To the naked eye and in real life, the colours in Vermeer’s ‘The Milkmaid’ knock your socks off; just as Rembrandt is absolutely a past master at drawing the eye to the old lady’s hand in ‘The Prophetess Anna’ – standing in front of the painting that is all you see, and it’s breathtaking. And Deborah Moggach likewise takes us by the hand with this book, bringing this period of time to life with deft strokes and faultless imagery.

You can see the Road of Knives, you can hear the water rippling, smell the paint, and delight in the idea of the tulips. Some reviewers find fault in the book because it does indeed push the boundaries of the imagination to the extreme, and yes, maybe the characters are a bit too two-dimensional and it is tiresome after a while to always have the quotations at the beginning of every chapter. But I do think it is a very good read, and just about credible, and above all I really think D.M. conjures up the atmosphere of the times very well.

It’s also very clever that the paperback book has paintings from the time interspersed between the pages, because first and foremost I think the author has done such a clever thing and made a link between art and reading that really works. And by the by, am off to the Louvre in a couple of weeks because coincidentally (and fortuitously) there will be a guided tour of paintings of the “Tulipmania” period, so may report back further at a later date.

P.S. HOT OFF THE PRESS – Alicia Vikander, freshly linked with Michael Fassbender, no less (and working together on the film version of a book I wept virtually all my way through – although do also feeling like bawling at the knowledge that Michael F. has been snapped up – watch this space re the new film of the novel “The Light Between Oceans”, not the romance, I hasten to add …) ramble over, Alicia V. is to be in the forthcoming film of this very book “Tulip Fever”, alongside Christopher Waltz and the 29 year old Dane DeHaan, who really ought to be Dutch with those looks and that name, but does in fact hail from Allentown, Pennsylvania. To be continued …